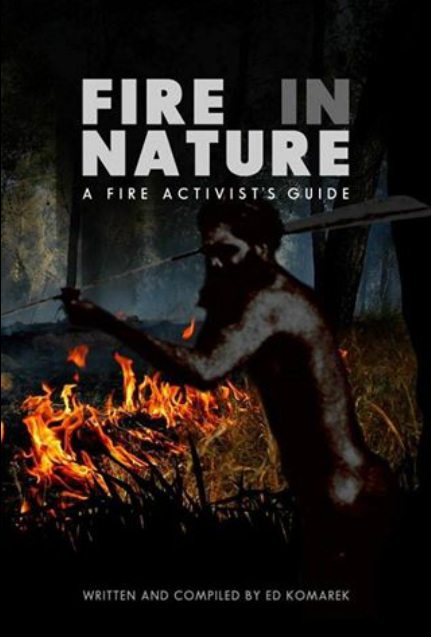 Fire in Nature, A Fire Activists Guide is the second book in the Enlighten Your World Legacy Series, written and complied by Ed Komarek on diverse topics of national and international importance.  Fire in Nature is free on this website as a public service with print and Kindle versions available on Amazon.  Just click on the introduction button to begin if it is showing, then the rest of the book is under the more button at the top right of this page.
This Legacy series of  books summarize the knowledge and wisdom gained in Ed's life in several areas of expertise.   Born into a family of early ecologists and more specifically fire ecologists,  Ed was  mentored by his father,  by the same name, along with  his father's ecological associates, including Herb Stoddard, one of the founders of both ecology and fire ecology. In this manner young Ed developed a comprehensive knowledge of fire ecology and good fire management through a kind of apprenticeship process mentored by some of best ecologists and land managers of the period.
After quitting college at the University of Alaska and co-authoring the first scientific paper on the fishes of the North Slope of Alaska for the Alaska Department of Fish and Game in the early 1970s, Ed went through an existential crisis and emerged intent on discovering himself and what life was really about.  This led him into the paranormal field eventually resulting in the writing of two books now free, UFOs Exopolitics and the New World Disorder and Enlightenment:  The Long Hard Road.
Ed, however, has not forgotten his fire wisdom and knowledge gained early in life and in later years.  Like his father Ed Sr., Ed feels outrage over the needless man caused catastrophic destruction of millions of acres of light ecosystems every year in the Western United States, Australia and elsewhere around the world.  Ed believes this destruction is mostly  due to misguided policies of a out of control fire suppression culture, that blames drought, terrorists, global warming, fire, arson, and lightning, everything but the real cause, the fire suppression culture itself.
Ed's father and his associates warned that unless something was done, parks like Yellowstone would  burn to the ground by catastrophic fire and that is exactly what happened.  Ed in turn sounds the alarm that there is a very high probability of terrorist wildfire attacks in the United States, and around the globe in the next few years, but is anybody listening?  Homeland security is already informed as to the threat as expressed in the article, Homeland Security Warns of Terrorist Wildfire Attacks. [8]  Ed is, and has been writing timely articles on fire for the online and mainstream media.  These articles can be republished by any media outlet without permission.  To access the articles click on the "Articles" button  at the top of the page.  Please reference this book's website in the republished articles.
The more money and resources the fire suppression industry and culture receives the better it becomes at suppressing fires, which have the undesired result of a unnatural buildup of fuel in light fire ecosystems.  These fuels will sooner or later ignite one way or the other by man or lightning, into catastrophic fires that consume everything in their wake with the power of multiple atomic bombs.  Light natural fires, or prescribed fires, simulate light natural fires in light fire ecosystems.  The light fires sweep the forest clean of litter, brush and forest diseases, keeping the light fire ecosystem vibrant, diverse and healthy.  The trees are protected by insulated bark.  This has the added benefit of keeping the forest safe from catastrophic fire by keeping the fuel loads low.   This USA Today article and Science Daily article illustrates this problem.
My most recent work is the Billion Acre Fire Management Plan for the Western United States.  Those that might wish to join Ed in this activist work can join the Facebook group called the Association of Fire Management Activists for discussions as how to proceed and build networks to promote light fire activism.  Ed has also started a group called Rebuilding Nature for those with an even more general interest in ecosystem restoration.  Ed can be reached on Facebook message, or at edkomarek@yahoo.com,   and he can be followed on Twitter:
Powered by